Buy a Foreclosure, get a Meth Lab free

Posted on May 31, 2012 by thenelliemaeproject

The first week in a renovation has always been full of surprises for us.

And not good surprises. “Murphy”, the 3 ft. long rat is what greeted us the first week at Nellie Mae. A rat this time? No. Even better. A Meth Lab.

Well, apparently we had no idea what this “shed” was really used for until we went inside.

Rumor has it, this old foreclosure we bought had multiple arrests made from this location for drug charges. I don’t know all the details (and don’t really care to).  When the listing agent came by to pick up their signs and lock box, I questioned him about what he saw when the owners defaulted on their payments and were forced to leave. The owners had left all their possessions on the inside and just left the house basically trashed. So the bank does what is called a “trash out” and sets all things inside the house on the lawn. The owners even left their cat. Someone did take the cat for a pet, by the way.  Anyway, I asked him about the drugs and he said the inside of the house was pretty much full of kid toys and he didn’t see any drugs or paraphernalia. Well, as we took apart this shed…. we soon realized there was a reason no drugs were used inside…. I think they were all out there!

The walls were super insulated (how many sheds do you insulate?) The roofing, sides, and all. Then, there was fireproofing installed throughout. It was also soundproof. Another huge clue. Then, there were many, many outlets and a lot of locks. Way more locks than a shed should have. Hooks hanging from the ceiling, ect.  Creepy. I guess we will never know for sure…

Needless to say, despite the fact this meth lab was taking up half the carport- it was just plain nasty and creepy and had to go. Because of all the insulation and fireproofing…. I’m sure neighbors thought we tore out the entire insides of our house. It was an unbelievable MESS. To be exact, when Tim took it to the dump, the contents weighed 2100 lbs.

Here are the demo pictures. I always say, it has to get worse before it gets better…. but that beautiful exposed stacked brick wall was a small glimmer of hope.

And thank you also to our friends, Greg and Jess Sykes for helping us take down the drug hut. We owe you. No seriously. 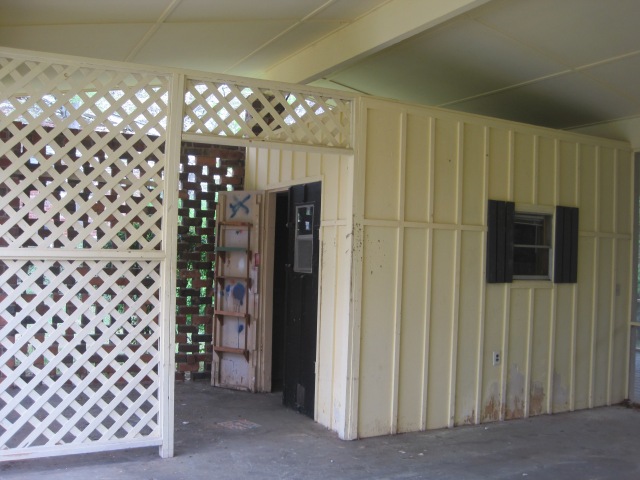 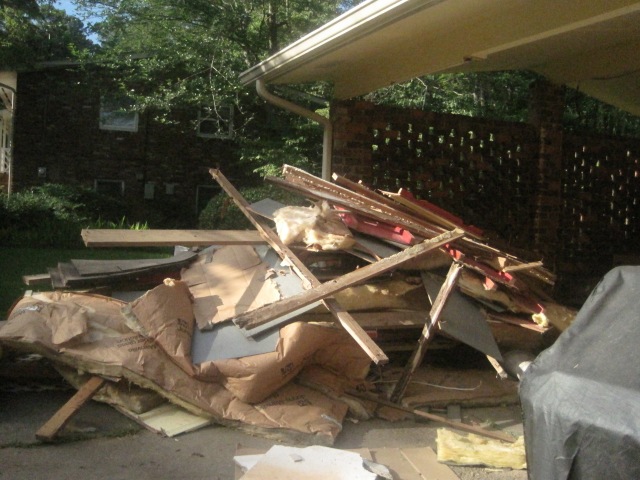 This entry was posted in Uncategorized. Bookmark the permalink.

4 Responses to Buy a Foreclosure, get a Meth Lab free